The Center wishes to act as an instigator on architecture publishing, contributing with others, supporting publication projects, and initiating its own projects.

Publications will cover architecture monographs, thematic books, postcards, city guides and so on. The ACA wishes to publish as well a periodical on architecture aiming at fostering an informed critical debate.

The Arab Center for Architecture in partnership with the Goethe Institut, Ramallah present Designing Modernity: Architecture in the Arab World 1945-1973, a book edited by George Arbid and Philipp Oswalt.

The Arab Center for Architecture announces the publication of "The Restoration Guidelines Manual for buildings constructed between the 1930s and the 1970s". It is published by ACA (2021) with the support of Amman Design Week and Goethe Institut. Co-authors are Naji Assi Architects and Yammine Yammine.

The manual will soon be available online and is available at ACA (open on Tuesdays and Wednesdays) in print distributed for free. 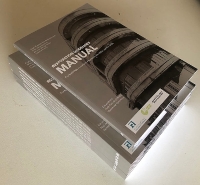 Editor: George Arbid
Production: Arab Center for Architecture
Publisher: UNESCO World Heritage Centre
Coordinator: Karim Hendili
Language: Arabic, English, French
Heritage of Urban and Architectural Modernities in the Arab World (MUAMA) is the official catalogue for the exhibition displayed during the Conference on Conservation of Urban and Architectural Heritage in the Arab States, from the 1st to the 3rd of December 2015 in Kuwait City.
It is published in Arabic, English and French.

George Arbid, editor
Publisher: The Ministry of Culture, Bahrain, and the Arab Center for Architecture, Beirut.
Language: Arabic and English

The publication is produced as part of the curation of the pavilion of the Kingdom of Bahrain at the 14th International Architecture Exhibition La Biennale de Venezia.
It comprises essays on the evolution of Architecture in the Arab world between 1914 and 2014, and a selection of 100 buildings represented in drawings and photographs.
It was printed in 40,000 copies and was distributed at the Pavilion in the Arsenale, Venice.

As an active participant in the Modern Heritage Observatory project, the ACA contributed to the MoHObserver, a publication issued at the occasion of the second regional meeting held at AUB, Beirut on November 1, 2013.
The publication is available online in English and Arabic.
Read the publication

Modern Design and Architecture in the Arab World: The Beginnings of a Project

The package contains a selection of 16 postcards produced at the occasion of the exhibition Modern Design and Architecture in the Arab World: The Beginnings of a Project, held in Beirut in May 2013.
The postcards can be acquired individually or as a set by getting in touch with the ACA.