We will be hosting an open house at the center on Wednesday, December 19, from 10am to 8pm.

A selection of special items will be available on this occasion.

Reprises, a talk by Karim Nader

The Arab Center for Architecture is a talk by Karim Nader, on Wednesday, December 12, at 6.30PM.
Revisiting structures that once were, in different programs or in different states, the lecture proposes to expand on the notion of Kierkegaard’s ‘Reprise,’ that remembrance be brought forward. To give a new life to those past constructions, architecture will have to inspire us through space and tactility to move towards a brighter future. The lecture will survey five projects, three completed and two in progress including the long awaited renovation of the Immeuble de l’Union on Spears street.
Karim Nader is an architect whose work is silent, but never still. Contextually engaged, he practices design fervently and conscientiously, believing that architecture moves through nature as much as nature moves through architecture.
He currently runs Karim Nader Studio founded in 2016 while he continues to teach at the American University of Beirut.
The talk is in English.

The Place That Remains: Closing Talk

On Friday December 7, at 7 PM, at the Sursock Museum, there will be the closing talk of the first Lebanese national participation at the Biennale Architettura, with Hala Younes and George Arbid. The catalogue will be on sale to support the Arab Center for Architecture.

The book includes the photographic works of Gregory Buchakjian, Catherine Cattaruzza, Gilbert Hage, Houda Kassatly, Talal Khoury, Ieva Saudargaité, Yasmina El Chami, and the 7 colorful maps of Beirut river watershed that were projected on the giant model displayed in the Lebanese Pavilion in Venice, as well as texts from the LAU conference in March 2018.

On Built Heritage and Art, the Baalbek and Tripoli Experiences

The Arab Center for Architecture is hosting a talk titled "On Built Heritage and Art, the Baalbek and Tripoli Experiences", with Karina El Helou.

More on the event here.

The event will be our 3rd Fundraising Screening at Metropolis Empire Sofil.

Read more about the event here. 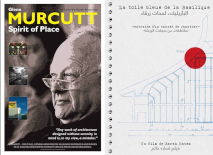 The Arab Center for Architecture is hosting an exhibition and talks around different projects as part of Beirut Design Week:

June 23 @ 6pm | Launch of the exhibition titled:
Abandoned Places, Public Spaces: Heritage Preservation
The exhibition will focus on various works produced by students and professionals addressing abandoned, neglected and residual spaces as potential public spaces.
The projects will show different instances such as the decaying remains of the Lebanese Coastal Railway, the houses and gardens frozen by a defunct highway project, the neglected wilderness of an endangered coastal peninsula and the disregarded fabric of the Mkalles Industrial Area, are turned into propelling elements of contemporary urban life.

The Arab Center for Architecture is taking part in the International Archives Day on June 9th. We are hosting an open doors event from 12 to 6pm to show you our center and answer your questions.

This event is in collaboration with the Modern Heritage Observatory, a network of professionals who dedicate their time for the preservation of our modern heritage.